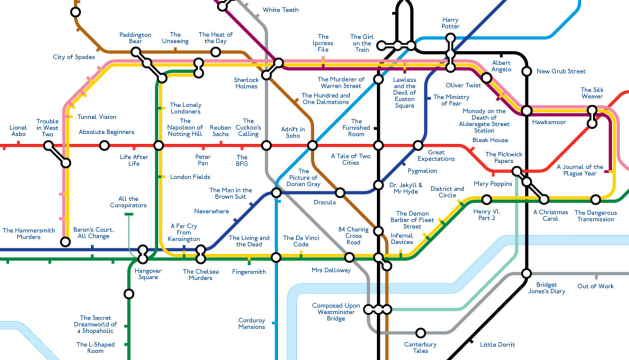 This is fun idea! Personalised book company In The Book has replaced the names of stations on the famous tube map with iconic literary works set in those areas. The result is a comprehensive geographical mapping of London’s greatest novels and poems throughout history.

I am immensely flattered to find The Silk Weaver featured as Liverpool Street Station which is just around the corner from Spitalfields where the book is set. On the map, I find myself in the hallowed company of Charles Dickens (who features most frequently, as you’d expect, with no few than seven novels); Graham Greene (The End of the Affair and The Ministry of Fear); Colin MacInnes (City of Spades, Absolute Beginners and Mr Love and Justice); Margaret Harkness (writing as John Law); Martin Amis and Zadie Smith.

It’s also fascinating to see how certain genres and authors are clustered in certain parts of the map: Dickens’ London dominates the Central Line while gothic Victorian works such as Dracula, Dr. Jekyll and Mr Hyde and The Picture of Dorian Gray can all be found haunting the Piccadilly Line. Zadie Smith’s works are located on the northwest Jubilee Line while Martin Amis’ novels were more prominent around West London.

My only disappointment is that In The Book hasn’t hyperlinked the book titles to further information online, so that we could, for instance, discover who the authors are, and find out more about the novels themselves.

Mother, grandmother and former journalist, from a family who've been weaving silk for 300 years. My 7th novel, Under a Wartime Sky, is published by Pan Macmillan in UK and Commonwealth, and in the US as Our Last Letter by Bookouture.